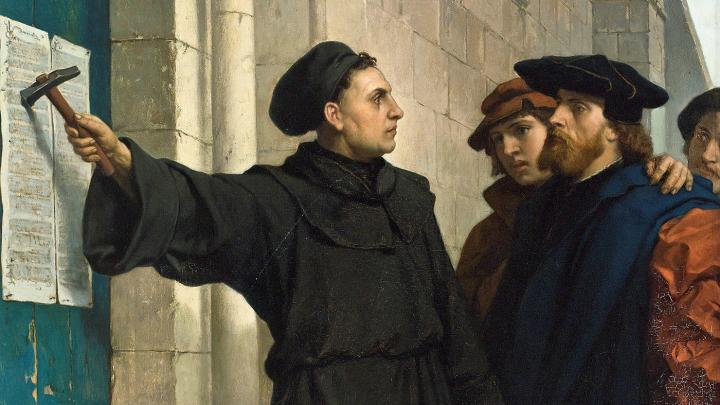 The Coffee — I recently checked out a coffee shop near my work called The Living Room. I tried a few of their coffees and was excited to purchase a bag of their house-roasted coffee and bring it home to brew for myself. I purchased their Ethiopian Roast. I have been brewing it in a pour-over for myself and friends and it made for some great coffee. It has the sweet start with notes of fruit and smooth finish that I have come to enjoy from similar Ethiopian roasts. I am happy I found a great coffee shop so close to my work and look forward to purchasing more of their coffee and trying more of their menu items.

The Theology — It is a great time of year. Fall brings about cooler weather, changing leaves, and a popular holiday for many: Halloween. However, October 31 also marks a pivotal day in church and world history. It is the day Martin Luther nailed his ninety-five theses to the doors of his local church and sparked the Protestant Reformation. This day has had a huge impact, and it is important to think back and reflect on Martin Luther and the Protestant Reformation.

Martin Luther was born in Germany on November 10, 1483, to a working-class family. His father, a miner, worked hard to get him into university where he excelled in his Bachelors and Masters degree studies and went on to law school. One night he was traveling to visit his parents when he got caught in a violent thunderstorm. He feared for his life and cried out to the only intercessor he knew, St. Anne the patron saint of miners. He prayed to St. Anne that if he was rescued from the storm, that he would become a monk. Much to his parent’s dismay he followed through on this promise and became a monk. Luther’s had deep religious convictions as he progressed in the monastery. He was heavily burdened by the thought of sin. He felt ashamed, and sometimes angry, as he believed God was leaving him to solve his sin problem, and that God would get angry when he failed. He was further concerned by some of the practices and views of grace and penance that he saw within the church. His abbot, seeing his potential, sent him on a pilgrimage to Rome, whereupon seeing the corruption and practices carried out in the city he became disillusioned. Upon return, he was sent to Wittenberg to study theology further. This proved to increase his convictions as he poured over scripture and works by early church leaders for answers to his struggles. Like most ordinary monks and priests, Luther had never had the chance to read through the Bible before this. Luther, through his studies, got the opportunity to read the original Greek New Testament and came upon the good news that would set his soul free from the burden of sin and works-based salvation. Luther read the truths in Romans 3: “None is righteous, no, not one”, “For by works of the law no human being will be justified in His sight”, “But now the righteousness of God has been manifested apart from the law, although the Law and Prophets bear witness to it- the righteousness of God through faith in Jesus Christ for all who believe. For there is no distinction: for all have sinned and fallen short for the glory of God, and are justified by his grace as a gift, through the redemption that is in Christ Jesus, whom God put forward as a propitiation by his blood, to be received by faith”. This was liberating for Luther but put him at odds with many thoughts and practices of the time. This all came to a boiling point on October 31, 1517. Luther picked this day out strategically. It was the day before All Saints Day. On this day, pilgrims would file past relics in the churches and plead for excess merits of the saints in hopes of appeasing the “righteous demands of God”. All Saints Day of 1517 bore special significance even outside of this fact. St. Peter’s Basilica was being constructed and the Vatican did not have the funds to finish it. A monk by the name of Johann Tetzel, with the authority and permission of the Pope, expanded the practice of indulgences to cover the cost. These started in the time of the Crusades when the Pope granted people merit for fighting to take back the Holy Land. In this case, they were selling indulgences to the people promising the merit and the forgiveness of sin past, present, and future and grant any soul eternal life. It was a corrupt practice that preyed on peasants who lacked wealth and were spiritually starving for the gospel, yet were promised a mere piece of paper as a remedy. By the time October 31, 1517, came around Luther could no longer stay silent. He wrote up his famous ninety-five theses and nailed them to the church door in Wittenberg. He thought it would spark scholastic debate at his university and that once the Pope discovered what was happening, he would abolish indulgences and bring change to the church. Luther’s ninety-five theses brought more discussion and change than he ever envisioned. The printing press was a recent development, and his October 31st theses were mass printed by his students and read by many. While Luther’s intention was never to break from the church, his hands were forced as the church refused to address or support his arguments. The German people were supportive. They were tired of seeing their country’s money go to Rome and their spiritual needs disregarded. As support spread wider, the Protestant Reformation kicked off. Luther inspired others to bring the spirit of the Reformation to their countries throughout Europe. The Bible was translated from Latin into a language the common people could read and understand. This was strictly forbidden by the Roman Catholic Church at the time. In 1517, the same year as the ninety-five theses, seven English parents were burned alive for translating The Lord’s Prayer into English for their children to learn. Translating the Bible into a language people could understand brought great spiritual nourishment to many. Luther’s translation of the New Testament became the basis for the High German language used in courts, government, television, and radio in Germany today. The Reformation also brought about great trial for Luther and those who embraced the movement. Luther was excommunicated, sentenced to death, and was hunted constantly. Many were executed for holding to the Protestant beliefs. However, the Protestant ideas of the sufficiency of scripture alone, and that we are saved in Christ alone, by faith alone, through grace alone, for God’s glory alone, known as the “Five Solas” preserved and took root in many countries and can still be seen today. Even Roman Catholicism benefited from the reformation in time, as it eventually permitted the Bible and Mass to be translated, allowed parishioners to take both wine and bread during communion for the first time, and the wide spread sale of indulgences was stopped, among other things.

Many great minds influenced Luther and took their stand before him for the truth and sufficiency of scripture. Further, many great minds came after Luther such as John Calvin and John Knox that have produced great Christian works that have been influential in my personal walk as well as in the countries that they brought the reformation ideas in. However, it is safe to say that Martin Luther was one of the most pivotal figures in church and world history, starting a movement that involved spiritual truth, power shifts both religious and secular throughout Europe, strides in communication with one of the first uses of the printing press to mass produce information to quickly get it out to the people and language translation, and set the foundation that led to the modern structure of Christianity.

Fall is one of my favorite times of the year and Halloween is a holiday that many love to celebrate, but I urge you to take some time on October 31st to remember and commemorate Martin Luther and the Protestant Reformation.

All Scriptures from the ESV Bible

If you have any comments, further discussion points, or suggestions for future topics I urge you to use the contact function; or email pourovertheology@gmail.com Sources:

One thought on “Happy Reformation Day”